TIMES OF CHAOS: AN OPPORTUNITY FOR MINING COMPANIES TO RAISE FINANCE?

In this three part series, Maxim Sobokarev, looks at the current and future impact of COVID-19 on the global mining sector and answers the question ¢ might current conditions offer nimble companies a chance to steal a march on their competitors by planning for a listing?  And, if they do, what should CEOs and CFOs be doing to capitalise on the opportunity?

WITH THE WORLD IN CHAOS, WHEN IS THE RIGHT TIME TO LIST?

The unleashing of COVID-19 on the world has brought about a catastrophe comparable to the biblical plagues. The resultant human tragedy and economic chaos are inextricably linked. Whilst some governments have reacted by introducing extensive restrictions, others have tried to maintain a balance between protecting lives and the economy. We are a long way from knowing which approach will prove to be preferable in the long run. However, the far reaching economic consequences are already evident.

The International Monetary FundÆs most recent World Economic Outlook Report, published in April, suggests that as a result of disruption to production, sales and supply chains caused by lockdown, the global economy will shrink by 3.0 percent in 2020 (down from predicted growth of 3.3 percent as recently as January), a far sharper contraction than even during the 2008-2009 financial crisis.

The impact on financial markets has been even more immediate and dramatic. Although they have now recovered slightly, equity markets in many economies fell by as much as 30 percent over the past two months and volatility has increased significantly. Debt markets have also been hit. In addition to increased volatility, liquidity has been strained even in such traditional havens as the US Treasury Market. For corporates, especially those with poor credit ratings, spreads have increased.

Of course, commodities markets have not been exempt. As demand has dried up, prices have plummeted, most dramatically illustrated by US oil prices turning negative, albeit briefly, on 20 April. 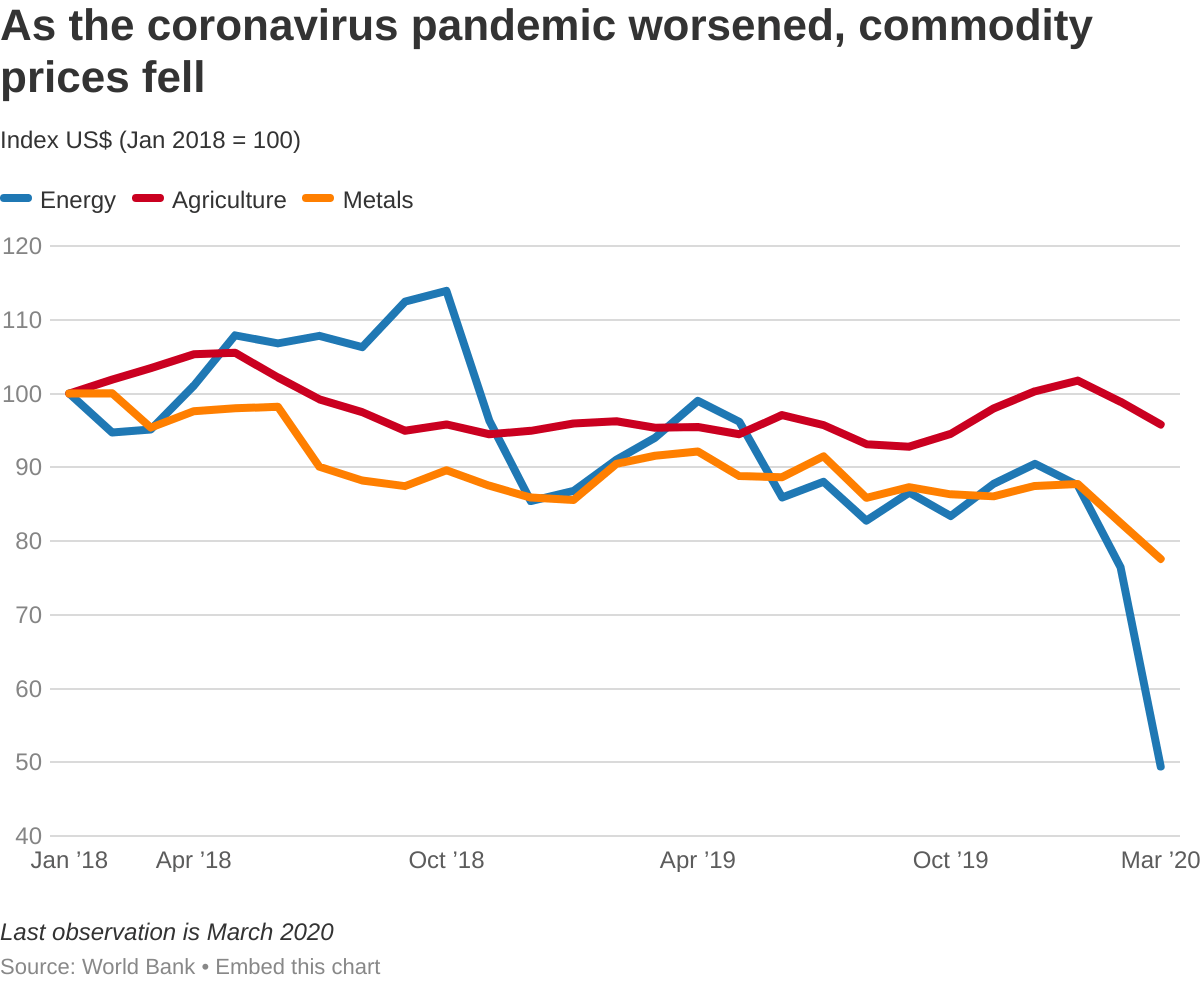 The World BankÆs Commodity Market Outlook Report, highlights the fact that its Metals and Minerals Price Index fell by 4.7 percent in the first quarter of 2020. The one bright spot, as might be expected, is the precious metals sector which increased by 5.4 percent over the same timeframe, mainly because of the contribution of gold which have edged up 14.9 percent.

While governments have been introducing stimulus packages, central banks around the globe have generally responded to the economic threat in the same way they did to the 2008-09 financial crisis, i.e. by reducing interest rates and providing increased liquidity. No doubt, the reduced returns available in the debt market have been one of the reasons the equity markets have not fallen further with investors willing to accept a certain level of increased risk to preserve profits. Although, of course, it is evident that they are now more selective about the sectors and individual businesses they are willing to back.

Although the scale of the current economic chaos is evident, it is less clear how long it will last and, when it comes to an end, how quick the recovery will be. The IMFÆs base case assumes that the pandemic fades in the second half of 2020 and lockdown measures can be reversed. Under this scenario it predicts that the global economy will rebound by 5.8 percent in 2021, reversing virtually the whole of the hit taken in 2020. However, the IMF fears that the risk to its base case is largely downside, noting that the outbreak might last into the second half of 2020 and that there is also a separate risk of a further outbreak during 2021. If either, or both, of these less optimistic scenarios playout there is a significant risk that global growth will remain negative during 2021 and stay that way for several more years.

In his Stories to Awaken the World, Feng Menglong famously writes ōIt is better to be a dog in times of tranquillity than a human in times of chaos.ö In the current environment those of us who are struggling to keep their businesses afloat may sense the truth in those words. If you are one of them, perhaps it is time to reflect on something President Kennedy once said, ōThe Chinese use two brush strokes to write the word 'crisis.' One brush stroke stands for danger; the other for opportunity. In a crisis, be aware of the danger--but recognise the opportunity.ö Although linguistic scholars may challenge the veracity of KennedyÆs etymology, the sentiment is undoubtedly correct ¢ a true entrepreneur will always find a way to thrive amidst chaos.

So, where are the opportunities for the mining sector in the current crisis?

Any answer to that question must start by looking at what we expect to happen over the next months and years. In this context, the difference between the most optimistic scenario set out by the IMF and the most pessimistic is highly significant and detailed plans will have to be adjusted to take into account how the pandemic develops in the future and its economic consequences. However, certain key factors will be the same whichever of the scenarios plays out and it is already possible to develop a strategy based on these.

As in the 2008-09 financial crisis, we can expect a continued supply of cheap money until the danger of inflation is greater than the fear of economic collapse. Even the most optimistic of us will agree that is a long way off. One consequence of this will be low interest rates and with them a pool of adventurous money looking for solid opportunities in equities to boost returns. At the same time, because many management teams will hold back from projects such as listings during uncertain times, there is likely to be a general shortage of projects coming to market.

While uncertainty remains the precious metals sector, in particular gold, can expect to see prices remaining relatively high. The rest of the mining sector must weather the current contraction in demand and then anticipate a more or less quick return to previous levels depending on which scenario plays out. If individual bankruptcies and mothballing of facilities result in an over-contraction of supply, it is possible that prices could spike when demand increases.

Operationally, the realities of COVID-19 can be expected to enhance the appeal of automation to secure uninterrupted production. Automated drills, self-driving trucks, AI equipment and remote control centres will all have their place. One only needs to look at Rio TintoÆs ōMine of Futureö programme, which started during the 2008 crisis, for inspiration. But, such innovations will not be possible without capital.

Taking all of this together, it seems probable that at some point over the next two to three years mining companies with a convincing story to tell will be able to tap the equity markets for funds.  The ideal time to do this will not be the same for every company. What is right for you will depend on a range of factors, internal and external and needs to be individually assessed. For some, particularly gold and precious metals companies, that time is likely to arrive sooner than for others. The key to success will be being prepared when the opportunity arrives.

Under any circumstances, but particularly in the volatile environment we can expect over the coming months, the speed with which a company goes to market may be the difference between a successful listing and one that fails to meet its targets. The time lag between taking a decision to list and achieving that ambition can be anything from 4 to 18 months. Companies can only expect to be at the lower end of this range if they have done their groundwork in advance. This will include ensuring they have the right team in place to do the job (both internally and through the appointment of key professional advisors) and that they are ready for the due diligence that will be an integral part of the listing process. Whilst time consuming, this initial preparation process need not be a financial burden on the company.

After a promising start to 2020, IPO activity globally was extremely slow in March and April. There are already signs that the market may start picking up during May and June. With this will come the first opportunities for companies that are nimble.  The time to start preparing is now. For the Moore ST team, the well-being and prosperity of our clients is always of paramount importance. So, whatever issues you may be facing, we are here to help. To this end Moore ST has established a special Crisis Taskforce Talking about the taskforce, Elena Tikhnenko, Chair of Supervisory Board, said, ōOur team includes lawyers, corporate structuring specialists, international tax experts and, of course, people with experience of a broad range of industries. We are monitoring legal and political developments on a daily basis and are actively helping clients find tailored solutions to the challenges they face.ö